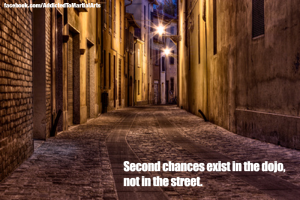 How’s it a going guys? This week we wanted to touch on the Myth vs. Reality in self defense.

What makes something a myth? Well simply put, it’s any drill or technique that works wonderfully in class but when tried against someone who isn’t a willing training partner it fails… on an epic scale…

One of the most common myths is that you can grab some bodies wrist while in the middle of a fight.

The hands are the fastest part of the human body and it it really Really hard to grab someone that way if their trying to not let you. Try this game out, have a partner move their hands as fast as they would in a confrontation and try to grab their wrist or hand…then try it with them holding a training knife…you’ll notice you will only grab them a couple times out of ten.

Instead try the same game and go for their elbows then slide down to the hands/wrists, by grabbing their elbows you can cut down how fast they can move them out of the way and you’ll pull off this move at much higher percentage rate.

Another extremely common myth is that you can block or perry when there’s multiple opponents. This one is easy to see how it wouldn’t work in reality. Try having two training partners throw random attacks at you, even slowly you’ll notice there going to be a lot of them getting and hitting you. To make your life easier with this, try using the Kali/Dirty Boxing shields. The shields are basically putting both palms on the head and hiding behind your elbows. A really common mistake with this is to keep your fists closed, you really don’t wanna do that, by keeping your fist closed there’s no difference when you partner hits your hand than if their hitting you with theirs. The secret to making this actually work in reality is to open your hand and place your palms tightly against your head.

Alright guys, there you go some easy, quick fixes for the most common mistakes in self defense. Try them out and have fun!

Have an awesome week and we’ll see you in the gym!!!!