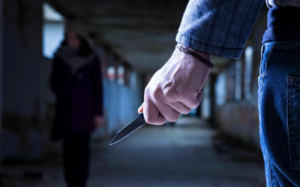 A little bit more on the serious side this week guys, we’re going to talk about the realities of Knife Attacks! There frightening, remarkably damaging and one of the hardest attacks to defend against. Knives are easy to get a hold of, easy to conceal and do an amazing amount of damage in a very short amount of time.

So, when it comes to Knife Attacks! how can we stack the odds in our favor? Well, first off we can take a look at how an attacker actually uses a knife. If we look at how a knife is used in the movies, we might think that every time someone is attacked with a knife it’s more of a fencing style duel…not so. If we study reality videos, such as on numerous Youtube channels, it quickly becomes apparent that knife attacks are not like what Hollywood shows.

Attackers using a knife don’t try to stab you just once but rather fire off dozens of stabs in rapid fire succession. It’s extremely unlikely to be able to catch the attacker hand or arm on the first stab and really just shouldn’t even be attempted, this is a sure way to get seriously injured. A significantly better option is to use the outside portion of your forearm to try to “shield” your body and move out of the way as far as possible. By using your foreman, you get a much larger surface area to block the attacking arm than with your hand and there is less important things on the outside of your forearm. That way you can minimize the damage and maximize the defense.

Another common misconception about Knife Attacks! is that they always come from in front of you. Again not so much, most attacks come from either the side or from behind which makes trying to grab the arm of the bad guy nearly impossible. So once again the forearm makes an incredibly better choice for your defense.

Try it out guys, have a training partner come at you with a rubber training knife from the side or even the front, stabbing multiple times and see what works best for you. See if you can grab their arm or hand and see if you can a higher percentage with the forearm.

Alrighty, have a fantastic week all and we’ll see ya in the gym!!!