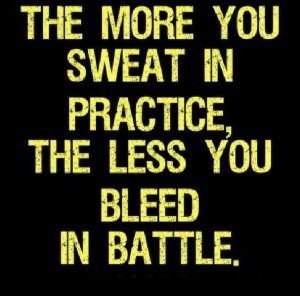 If you’ve taken the Kali Method class here at Synergy you have probably heard Dr. Rick talk about this but just in case your unfamiliar with it here’s some basic information on this awesome technical application:

The push-pull concept, or Dumog as it is known in the Filipino Martial Arts, is the foundation for an effective take down, joint lock or body manipulation and is the base of Filipino grappling.

Simply put, while trying to execute a technique you isolate one or more joints in your opponents body by holding onto both sides of that joint then you push away on one side while simultaneously pulling on the other. Now of course it’s not as easy as it sounds and like anything else in Self Defense and Martial Arts training it must be practiced and drilled in order to efficiently pull it off.

As an example of this theory, let’s look at a stereo typical wrist lock:

A wrist lock in normally taught with both thumbs placed on the back of the hand near the knuckles and applied by pressing the thumbs forward towards the attacker.

To use The Filipino Push-Pull Concept with a wrist lock you would instead grab the back of the opponents hand sideways to their hand creating a “cup” at the same time holding onto the bottom of the forearm close to the wrist and then at the same time push the hand towards the bad guy pointing his fingers back towards him while pulling the forearm/wrist toward you resulting in almost double the amount of force and torque created by the lock.

This concept is not by any means only found in the Filipino Martial Arts but due to the fact that blades are extremely common in that region of the world they were forced to master this and to make it as effective as possible.

With some instruction, regular training and drilling and a little bit of imagination, you can use this simple trick to make any and every sort of body mechanics easier to do and get better results.