Hey all, so this week we here at Synergy would like to take a moment or two to talk about Weapons. 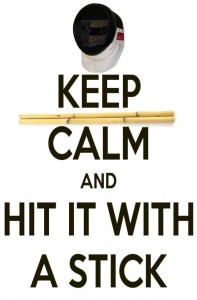 Ah, Weapons, we know them, we love them and it’s a matter of fact that they’re here to stay. Whether were talking about traditional Martial Arts Weapons like swords or nunchucks or the more real world ones like knives, baseball bats or firearms every good Self defense system has at a minimum a handful of unarmed moves against Weapons.

It is an unfortunate reality that if Weapons are involved in a fight, the chance of injuries goes up exponentially. They make it much harder to keep the “fight or flight” syndrome from shutting you down. This is largely due to the psychological effect that Weapons have on us. They simply scare us…unless you spend some training time learning them. You need to put your Weapons training under the exact same kind of stress as your empty hand techniques or, to be brutally honest, you’ll never be able to actually utilize them in reality.

Now it is pretty obvious here at Synergy that we firmly believe in not only knowing how to defend yourself from Weapons used in attacks but that you should know how to actually use the Weapons that are most likely to be used in a violent altercation. In fact, we hold two classes a week specifically to focus on these two vital areas of study with one more being added very soon. (More on this later…)

So to sum up, get those Kali classes in guys. You never know when you’ll need to be able to use a knife or swing a stick…

And now for the announcements…

Coming up this Saturday at 12:30 till 2:30 were proud to be holding a Tactical Unarmed vs. a Knife Specialty Course. If you attended the Active Shooter Course you kinda have an idea of how effective these courses are and how invaluable this information is to have.

Sign up as soon as possible in order to get your discounted price of only $30. Prices go up to $50 the day of the event.

And next up, Synergy is very happy to announce that starting next Thursday we will be officially holding C-Tac or Civilian Tactical

classes!!! C-Tac is a remarkably effective tactical based system designed to give the most intelligent response to the most common street attacks, ranging from Weapons to empty hand to car based attacks, there is nothing quite like this amazing system.